America’s oil demand has soared to new heights in a remarkable turnaround from just a year ago when the pandemic sent the U.S. economy into a tailspin and decimated demand.

A rolling average of U.S. total oil products supplied – an indicator of consumption – jumped to the highest seasonal level in government data going back three decades in the week ending July 2. While gasoline and diesel demand have returned to pre-pandemic levels, a surge in petroleum use for products such as plastic, asphalt, lubricants and other industrial needs is propelling the recovery.

“A lot more industry is coming back online,” said Rebecca Babin, senior energy trader at CIBC Private Wealth Management, US. “As the economy gets humming, those other types as well as gasoline and diesel feed into it.”

The comeback in U.S. consumption threatens to accelerate a global supply deficit, with the OPEC+ alliance unable to agree on a deal to increase production and American shale producers favoring fiscal discipline over boosting output. The demand rebound comes with jet fuel use still 24% below July 2019, suggesting markets could tighten even further, and prices could climb higher, when air travel normalizes. 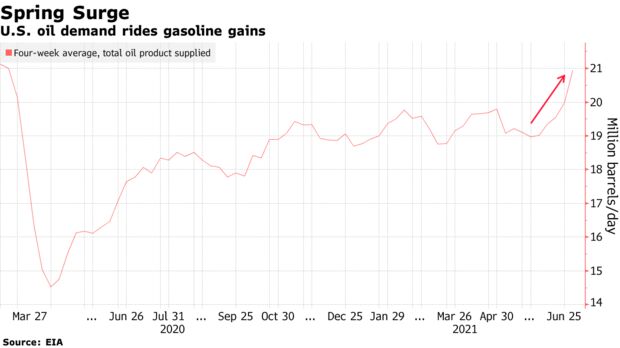 Petrochemical producers invested heavily in manufacturing in the U.S. in the decade after fracking technology led to a surge in oil and gas production as well as low-cost natural gas liquids. The result has been an onslaught of plastic manufacturing along the U.S. Gulf Coast in recent years.

The plastic producers were well positioned at the start of the pandemic to take advantage of a need for more packaging with consumers ordering more products for delivery. There was also an urgent need to provide protective equipment to health-care workers.

“We are hearing anecdotal stories of high petrochemical feedstock demand,” said Quinn Kiley, a portfolio manager at Tortoise, a firm that markets roughly $8 billion in energy-related assets. “If you think about increased demand for PPE (personal protective equipment) and one-touch plastics given pandemic-related issues, it makes sense.”

Other gains in consumption aside from gasoline and diesel include more than a dozen products, including butane for gasoline blending and lubricants for heavy equipment. Propane demand has also surged with Americans stuck at home during the pandemic grilling more than ever.

The surge in durable goods order has also been a key driver in the demand for lubricants and base oils. But inflation and a drop in disposable income, following the cuts to unemployment benefits, may derail the recent uptrend. — Fernando Valle, oil analyst

The crude market will remain tight with U.S. weekly production hovering around 11 million barrels a day for months or about 2 million barrels less than where it was in early 2020, and OPEC+ not adding any output until August at the soonest.

The U.S. supply situation is so strained that earlier this month West Texas Intermediate futures rose to their strongest level relative to international benchmark Brent since October. In fact, some refiners in the Rocky Mountain region are finding it hard to secure barrels because production there has been the slowest to recover.

Strong demand for crude has plunged inventories at Cushing, Oklahoma, the delivery point of the Nymex futures contract to the lowest level since March of 2020.

The need for crude to keep up with demand should keep oil within the U.S. and attract imports, said Artem Abramov, partner and head of shale research at Rystad Energy AS.

The jump in industrial use comes on top of a robust recovery for both gasoline and diesel, which still account for the majority of oil demand.

The week running up to the Independence Day holiday saw weekly gasoline supplied hit a fresh record in EIA data. The rolling average of diesel supplied, at 4.07 million barrels a day reached its highest for the week since 2017.