Oil declined as investors shifted their focus to domestic supply, with expectations for another build in already swelling U.S. stockpiles.

Futures in New York fell 1.3% on Tuesday. Analysts in a Bloomberg survey expect a 450,000-barrel gain in U.S. crude stockpiles. While the industry-funded American Petroleum Institute reported a 6.83-million-barrel decrease in oil supplies, it posted a rise of 1.08 million barrels in gasoline inventories.

Consultant Rystad Energy highlighted the risks to crude’s recovery from a record glut earlier this year, saying it expects oil supply to eclipse demand for the next four months.

“Demand for crude oil right now, whether it’s driving or especially on the airline front of it, is definitely a little bit weaker,” said Tariq Zahir, managing member of the global macro program at Tyche Capital Advisors LLC. “We’re kind of in a range here right now, at least until the EIA numbers come out.” 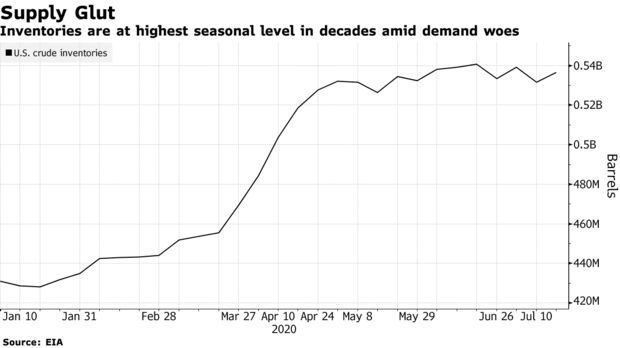 Following a swift rebound from April lows, crude prices have struggled to find direction in recent months, with U.S. benchmark futures bouncing in a tight range around $40 a barrel as the resurgent pandemic sours prospects for a demand recovery. In the U.S., New Jersey’s transmission rate hit its highest in three months. Elsewhere, countries from the Netherlands to Malaysia are facing a rise in new cases and China’s virus cluster has spread to Beijing.

Oil-consulting firm FGE said U.S. gasoline demand will have a hard time reaching 9 million barrels a day this year and the International Air Transport Association’s chief economist expects that future demand for jet fuel will not catch up with the pre-Covid forecast for at least five years.

The API also reported a 187,000-barrel build in distillate supplies.

The futures curve is also showing signs of weakness. Brent’s September futures were 39 cents cheaper than for October, compared with a 23-cent discount a week earlier. The difference between the front- and second-month price is known as the prompt timespread. WTI’s prompt spread has also declined. The widening discounts, known as contango, is typical of a supply glut.

“No matter how you cut it, contango encourages storage,” Bob Yawger, director of the futures division at Mizuho Securities USA, said in a note. “Until that math is eliminated from the energy patch, prices will struggle to rally to the next level. Prices are more likely to break down.”