-Oil resumed gains, clinging to a three-month high as signs of improving demand buoyed a market momentarily roiled by confusion over U.S.-China trade.

Futures in New York rose 0.4% after President Donald Trump said the deal with Beijing was “fully intact” following remarks from a trade adviser that were interpreted as an end to the agreement. After earlier dropping 2.4%, crude is now back above $40 a barrel, bolstered in recent days by a lifting of lockdown restrictions in some U.S. states, while physical crude prices have also climbed. 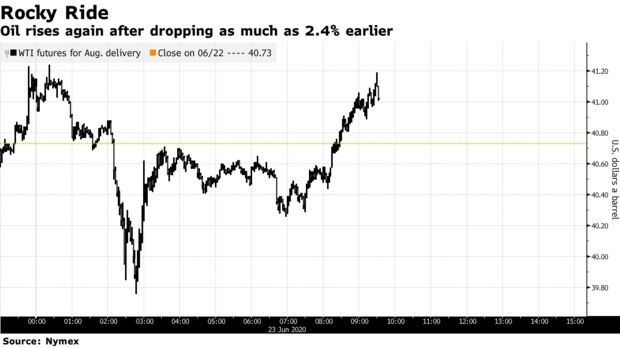 Oil has rebounded since plunging below zero in April and is now trading at levels last seen before Russia and Saudi Arabia engaged in a damaging, though short-lived, price war. The kingdom’s Energy Minister Prince Abdulaziz bin Salman said last week that OPEC+ is on course to rebalance the market, and some of the world’s largest traders are seeing a rapid recovery in demand.

“Looking at the strength of the physical market and recovering global oil demand, we think that the crude-oil price is still on its way higher,” said Bjarne Schieldrop, chief commodities analyst at SEB AB.

The coronavirus pandemic has been a constant source of tension between Washington and Beijing since they agreed on their phase-one trade deal. In the latest developments, the U.S. imposed constraints on four more Chinese media companies, while the Asian nation blocked poultry imports from a Tyson Foods Inc. plant where hundreds of people tested positive for the virus. Nevertheless, Delta Air Lines said it’s resuming flights to China.

The weekly round of U.S. inventory data begins with industry figures on Tuesday. A Bloomberg survey is predicting that stockpiles rose by 2 million barrels last week, a sign that the recovery is likely to be uneven. If confirmed by government data Wednesday, it would be a third weekly gain.